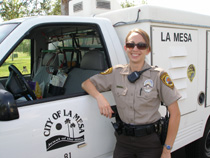 Our Animal Control Officer works at the La Mesa Police Department. They investigate a wide variety of problems related to domestic animals and enforce ordinances, such as leash laws and dog license requirements. Please see the following sections for information on dealing with wildlife (coyotes, raccoons, skunks, etc.) and tips on resolving neighborhood animal
noise complaints in the City of La Mesa.

Stray dogs found in the City of La Mesa need to be taken to the El Cajon Animal Shelter. The El Cajon Animal Shelter provides sheltering services for the City of La Mesa and dog owners from our city will be directed to look for their pet at that facility.  Other shelters may accept a dog from La Mesa; however, it must then be transported to the El Cajon Shelter which causes a delay in reuniting the dog and its owner.

Stray cats are considered free roaming animals.  They are not picked up by Animal Control.  The El Cajon Shelter will accept cats as strays into their facility, but given the nature of their free roaming lifestyle, you may want to check with your neighbors to make sure that the cat isn't a neighborhood pet.

If you are missing your pet, you should report it to Animal Control so that we can enter it into our lost and found directory. All stray animals picked up in La Mesa are taken to the El Cajon Shelter, so you should also check there for your pet.

The City of La Mesa does not maintain its own animal shelter. We contract with the City of El Cajon to provide shelter services. If you wish to adopt an animal, please contact the El Cajon Animal Shelter by phone at 619.441.1580 or in person at:


All San Diego shelters including the El Cajon Shelter, work towards the goal that every adoptable animal will be adopted. Adoptable animals are not euthanized due to space concerns or length of time in the shelter.

La Mesa Animal Control only services the incorporated City of La Mesa. Unincorporated areas of La Mesa such as Mount Helix and the Spring Valley area are serviced by the County of San Diego Animal Services. They can be reached at 619.278.9760.

Lemon Grove is under the jurisdiction of Chula Vista Animal Control and they can be reached at 619.691.5123.

Deceased pets and deceased animals from roadways can be brought to the La Mesa Police Department at 8085 University Avenue, La Mesa, CA 91942.  Leave the animal in your vehicle and let the front office know that you are bringing in a deceased animal.  There is a fee for storage and removal of deceased pets.  Deceased animals are held in frozen storage and are removed by an independent contractor on a weekly basis.