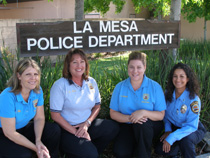 
The Communications Unit consists of 2 Communications Supervisor, 12 Police Dispatchers, and 3 Police Services Technicians.  Together they perform all of the Police Department's communications and record-keeping tasks, including:


Members of the investigation Unit consist of a Service Commander, Services Lieutenant/PIO, and Services Sergeant.  There are currently 6 full-time detectives with one being an anchor detective for the La Mesa Police Department.


The La Mesa Police Department, in conjunction with the La Mesa-Spring Valley School District supports a School Resource Officer, or "SRO",to work with elementary and middle schools in La Mesa.  The SRO devotes their time to school campuses, acting as liaison with staff, parents, and students, serving as role models, providing instruction and staff training, and insuring campus safety.  The SRO is trained as an instructor in the Project Alert Program, which is taught in partnership with teachers at the middle school level.


Downtown operations assistants are tasked with enforcing parking regulations within Parking District 1 (downtown) and other areas of the city on an as-needed basis, assisting with the implementation of Parking Permit Program and with assisting city Public Works staff to facilitate street cleaning operations. In addition, downtown operations assistants serve as ambassadors for the city and are a valuable assistance resource for business owners and visitors with questions or concerns.


Reserve police officers are members of the community who receive the same training as full-time police officer,  but volunteer their time to the Police Department.